Djedai, Steiner and Heart's that PROJECT CHARGE
How can you be a Djedai by raising the Djed in your heart?

There is a symmetry based on PHI Golden Ratio which raises the Djed!!

"TO MAKE HEART IS TO DIMPLE - Initiate Compression (By PHI) & Self Organize ANYTHING!"

Since before the days when Prof.Korotkov measured Golden Ratio between brain wave harmonics identifying BLISS AND EUPHORIA in the laboratory, and when Dr.Ed Wilson discovered fibonacci to Golden Ratio audio tones induced transcendance in brain waves at Monroe Institute.. and when Dan Winter first found Golden Ratio in EKG harmonics identified compassion and compression in the HEART.... (Even the stock market self organizes into compression the moment its chaos emerges in PHI ratio - Prechter & Elliot Wave)...

..How PhiRICAIS (Implosion) is revealed by Spectrum Analysis.."

Now, below we provide a few ongoing updates to this excitement - where physics is going (Embedding by Golden Ration) to solve the unified field..

Also: Alexey P. Stakhov <mailto:anna@nest.vinnica.ua> sends - Subject: Resolution of Golden Conference
Dear colleagues: The present stage in development of science is characterized by great interst in the doctrine on numerical Universe harmony created by Pythagoreans, in the "Sacred Geometry" created by the antique scientists, and in "sacred knowlege" contained in Talmud, Bible, Chinese "Book of Changes" and other texts. The Golden Section plays a central role in the "Sacred Geometry". This direction of human culture stands on the high-power scientific base created by the works of the outstanding scientists and thinkers of manking: the Great Greeks Pythagoras, Plato, Euclid, the great Italians Fibonacci, Leonardo da Vince, Luca Pacioli, the genius astronomer Johannes Kepler, the French mathematicians Lucas and Binet, the German scientific Zeising, the great geometer Felix Klein and others.

It is surprising that now on the Internet it is exhibited about 4 millions sites where Fibonacci numbers and the Golden Section are mentioned! And this number is the most convincing evidence of great interest in Fibonacci numbers and the Golden Section in modern culture, moreover, this fact confirms active process of modern science "Fibonaccization" that is one of the major tendencies in development of modern culture. Also there are all reasons to suppose that just this process could lead to creation of new interdisciplinary science, "Sciences of System Harmony", which could become a source of new ideas in development of philosophy, history of science, mathematics, physics, chemistry, biology, economy, computer sciences and electric communication, linguistics, poetry, music, architecture!

I would like to inform you that the International Conference "Problems of Harmony, Symmetry and the Golden Section in Nature, Science and Art" was held in Vinnitsa State Agricultural University in October 22-25, 2003. The main purpose of the Conference was to join all Slavonic Fibonacci scientists and to discuss contribution of the Slavonic science to development of this important direction.

Also I would like to inform you that the official address of our Museum and Club is admin@goldenmuseum.com , Sincerely yours Alexey Stakhov, Doctor of Sciences in Computer Science, Professor, Academician of the Academy of Engineering Sciences of Ukraine, Scientific Coordinator of the Conference, President of the International Club of the Golden Section

Also: "Unified Field" Physics? based on Golden Mean Ratio by Alex Kaivarainen new additions from Alex Kaivarainen from Finland / Russia, on Golden Mean Ratio solutions in contemporary physics. Quoting Alex: "Our dynamic duality model elucidates the quantum background of non-locality, principle of least action and Golden mean, unifies the quantum and relativist theories. Tending of open systems to conditions of Golden mean is supposed to be a driving force of their self-organization." ,
new->Nov 27,2003: From: Alex Kaivarainen http://www.karelia.ru/~alexk , http://camp.karelia.ru , e-mail: h2o@karelia.ru - Dear Dan, What point of Globe and HOW are you ? I like our contact this August very much. Strongly improved and developed version of my Unified theory is attached. UnifTheory251103.pdf - Gradually, with help of Bivacuum Harmonization Force this work turns to Golden mean shape ;-) Hopefully, you like it. Warm greetings also to your very special - French/Sweden girl friend. Sincerely yours. Alex

Part 3 - How can you be a Djedai by raising the Djed in your heart?
There is a symmetry based on PHI Golden Ratio which raises the Djed!!

Quote from Dan Winter: "I believe that the REASON the Golden Mean recursive wave ratio cascade is THE SOLE SOLUTION to COMPRESSION and "NON-LOCALITY" (true multiple-connected topologies)- is the coherent acceleration of phase velocities thru speed of light. True FUSION is only possible when waves nest in Golden Mean Ratio. Einstein while noting that acceleration was identical to gravity failed to note that recursive compression was identical to acceleration! Wave lengths and wave phase velocities both add and multiply in Golden Ratio- this is the solution to Einstein - because this alone is the symmetry which can turn compression in to acceleration (which is gravity). Thus linking charge compression - mass making - to charge acceleration -gravity making. Hence capacitors linking charge waves in this Golden Ratio cone extract voltage from gravity and produce gravity from voltage."

The secret to gravity and the unified field is knowing HOW capacitors communicate - here obviously faster than light speed..

Thanks to Raphiem "foreverblue" for the connection to the Crooks tubes in Egypt references below..

NOTE THE Djed Concept of Projective Capacitance in ancient architecture..

Below- the CROOKES TUBES projecting charge in Egypt.. referred to in their Hieroglyphs as SEREF or TO GLOW - San Serif- Seraphic- CUT (SERRATE) by PHI..Sacred CUT.. Golden Ratio..

What were these Egyptians doing projecting CHARGE from spiral conic capacitors? Were they directing the shape of a capacitive field into compression/focus/acceleration in order to control healing and life force biologic process?

Compare to CROOKES TUBE-modern method of projecting a charge field..

.. Next compare this idea of a capacitive projector - a 'snake head' at the end of a cone.. ("Crooke's Tube)..

a new look at the teachings of Steiner ("Projective Geometry & Etheric Formative Forces")
- confirmed in light of the new science of the electrical nature of LIFE FORCE and bliss.. as PROJECTIVE CHARGE COMPRESSION / ACCELERATION / - the DJED!

Dan's teachings on the role of bliss in fabricating immune health, gravity, and biologic sustainability are the essence of his new book IMPLOSION'S GRAND ATTRACTOR.. ( goldenmean.info/newbook ) - and his training courses offered in many countries. ( goldenmean.info/course )

The original Steiner idea..that PROJECTIVE GEOMETRY is the map for the ETHERIC FORMATIVE FORCES .. is today perfectly borne out as Winter's group documents the projection of harmonics of CHARGE -- as the definition and measurement technique for electrically understanding LIFE FORCE. ( the ability to fractally attract and self organize CHARGE - by turning charge compression in to acceleration!).

connecting the classic STEINER ideas - to modern science in the understanding of the nature of SPIRIT (as spirals of charge) and LIFE itself.

Then below - we reprint goldenmean.info/biophoton the summary of the current literature on Dan's current research MEASURING LIFE FORCE ELECTRICALLY.. - a TRUE SCIENCE OF SPIRIT.. 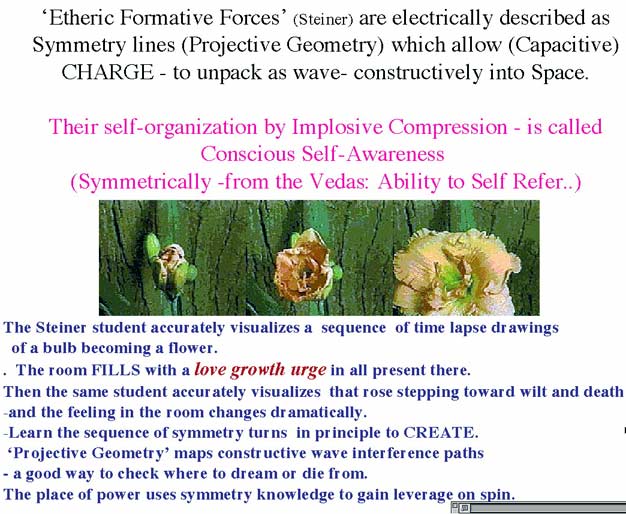 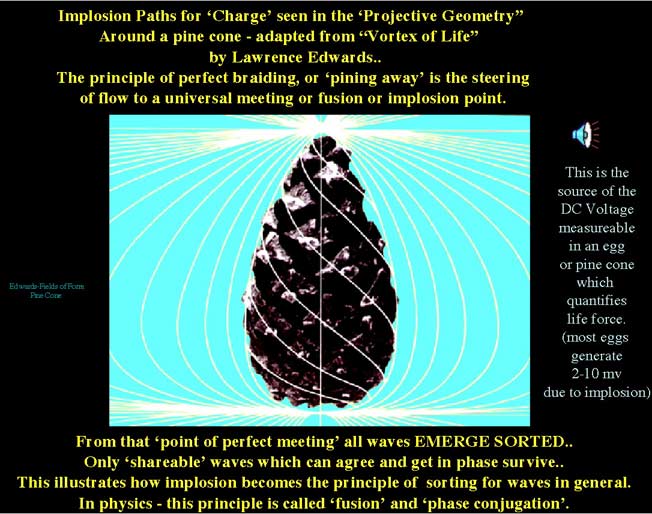 Below: DID ENKI (the RA in Ab-RA-ham) learn to make a soul in DNA by discovering the symmetry of capacitive charge implosion?

acknowledgement and thanks to NICK THOMAS for the right hand part of the above and below images! www.anth.org.uk/NCT 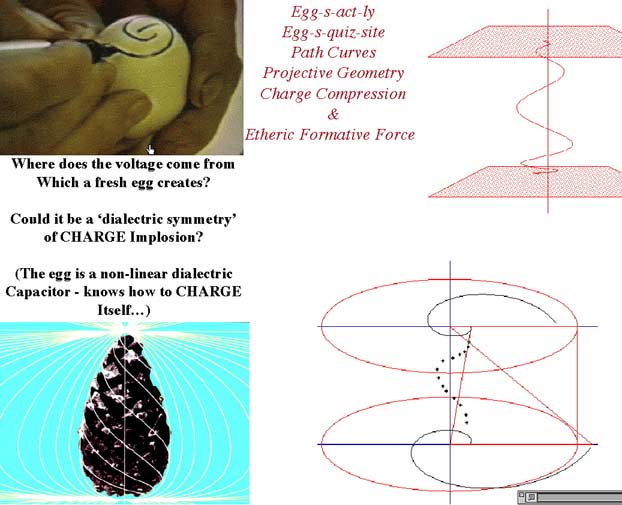 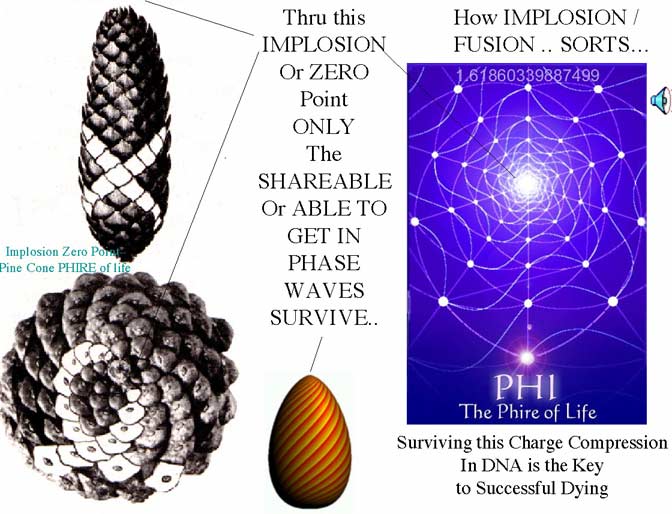 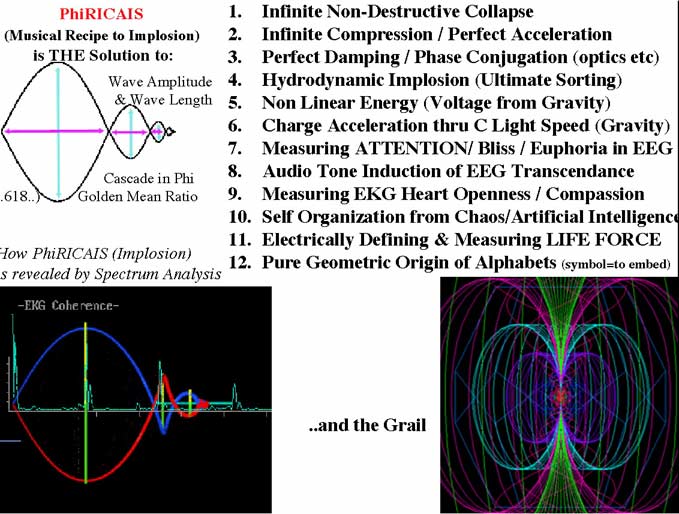 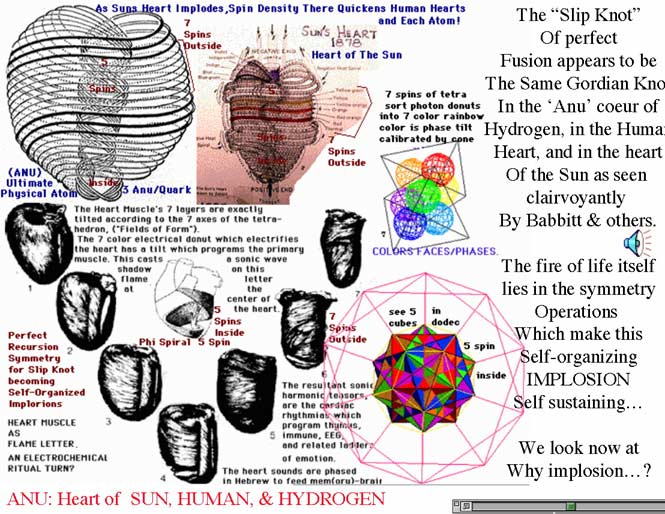