tabular data set rearranged to be fractal and therefore compressible

The difference beween scale invariant wave form data, versus non-compressible image/imagination has a dramatic parallel in computer image processing. That difference is MORE than symbolized by exactly the difference between vector based (Freehand / Illustrator / Flash), versus bitmapped (pic/gif etc.) images. When each line or curve is a vector, and directed essentially by an equation, than the image can be compressed OR EXPANDED to any scale with 'inphknit' resolution. It is the same as relating all the info you try to store in your head by the mind numbing approach of "Trivial Pursuits", versus relating EVERYTHING your learn, to PURE PRINCIPLE. In the latter data storage algorhythmn inphiknit context dependancy makes all data retrievable with by context, even with a lo sampling rate as to detail. (DNA=hi signal to noise ratio because of the CONTEXT RICHNESS of phase disciplined braiding). That is why, memories of pure principle last thru death.. 'ensouled' they survive the compression of the 'still point'. That is also why anyone who sells you any device or learning, who tries to secret from you the PURE PRINCIPLE of HOW IT WORKS, actually is disempowering you. (examples: the Catholic Church or the latest silver bullet miracle cure or gadget ).

The unified field means a single compressible medium with waves moving through the jello, stores the spin patterns inertia we have been calling at once: matter AND mind. In both cases, matter and mind occurs among waves when a self organizing centering force is created. Forming this "fractal attractor" keeps wave pressure fronts converging into this self organizing "implosion", which is the only truly "self-reproducing automata".

In order to understand how wave fronts store their pressures in a way which permits them to add and multiply concentrically non-destructively, let us look at examples of why mind inhabits flame (phi's ray or fire):

here we revolve a sine wave into more it's true 3D "pressure equilibria" map:
then we nest it's pressure's recursively in such a way that the wave fronts nest concrescently (crests summing). This forces them into PHI's Golden Ratio (the requirement for repeated heterodyne wave addition geometrically seeks out by natural selection waves adding and multiplying into .618 ratios). This is called Phi's Ray or simply FIRE for short.

This grail symmetric is the key to PHIlotaxis, the ratio of all natures perfect branching - making 'maximum exposure', 'minimum superposition'. This is another way of saying this PHIre shape.. (which mind/recursion 'inhabits') is the perfect way to SHARE (compress/distribute) the LIGHT.. (anything made of waves which is everything).
Note that the symmetry of this inphiknit stellation of dodeca-icosahedra is exactly the shape of the Earth Grid, 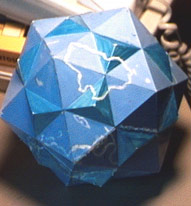 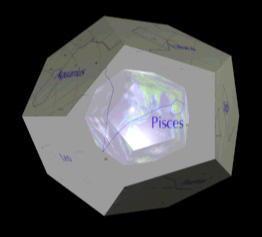 FOR A REASON... LIFE cannot exist without perfect embedding. This is the key to geomancy long wave magnetics to literally 'assume the position'. (All earth movers need to check their ley lines first to prevent the bleeding of embedding force/phi mag-netic... which stabilizes gravity, holds atmosphere, makes climate emerge from chaos, & facilitates human eck-stacy).

because of scale invariance,
the pressure (or voltage) wave fronts get "permission" to all non-(phase)-destructively approach the same center:
"permission" to turn inside out, or implode..

Then we notice that this wave summation in 3D produces a form of wave nesting most able to embed multi axis spin pattern, geometry. The geometry of maximum "SCALE INVARIANCE" is dodeca-icosa because the 3D x,y,z coordinates of infinite dodeca-icosa stellation are all simply a power series multiplying GOLDEN MEAN or PHI times itself. This means that the distance from any vertex in this IN-PHI-KNIT nest to center is always a multiple of the GOLDEN MEAN. These pictures illustrate this perfect embedding.

SCALE INVARIANCE here means that the pattern held between the waves (which we have been calling MATTER and MIND), can be held even if the form or wave nodes are packed or unpacked into the infinitely small or large. Because of this scale invariance, the pressure and spin density of these waves crossing in this way, can converge infinitely to center. This is the geometry of perfect implosion which Einstein needed in order to understand how black holes bend time. More siginificantly for this conversation this is the geometry for the one way wind inward of magnetism which Einstein called the "magnetic monopole", WHICH IS THE DEFINITION OF GRAVITY. In other words, gravity occurs among waves ONLY when the geometry of this only significant possible centering force, RECURSION OR NESTING PERFECTED, is organized. Thus the work it might take for example to get data rearranged so as to be fractal and therefore perfectly compressible, is the same work which nature must do to make gravity. Predicting how much gravity force in a wave quantum is as simple as evaluating it's recursiveness.

For example if we look at the true multidimensional perspective of the symmetry of the outer electron sub-shells, we find that they are PHI recursive. (reference also Randy Masters work on the PHI harmonic series in Hydrogen's spectral emission lines.) Specifically, the atomic table is built entirely by simply nesting s,p,d,and f subshells recursively. They are said to have 2,6,10, and 14 "electrons" respectively. Well electrons are only names for the amount of inertia stored in spin vortex. Since they are stored as vorex pairs, this means that each PAIR of vorex is a name for a torus or DONUT. (The revolved sine wave, toroidal domain shape of every field.) So now, instead of naming 2,6,10 and 14 electrons, we see we have been naming 1,3,5,and 7 tilted donuts.

note that the 5 tetra tilt by 32 degree creates the same dodec/icos which 5cubes do.. this is phillips actual model for star group valence..

Now compare this 5 spins inside, 7 spins outside to the entire "Heart of Sun" article. Notice that this 5 spin 7 spin perfect slip knot has always been how you tie up a "White River Junction" among waves so that inertia is stored (matter is created).

top anu primal sub-atomics braid by quark 3some into hydrogen, per phillips "psi perception of quarks" justification of "occult chemistry's clairvoyance to modern quark sub-atomic physics literature.., bottom note geometry of this primal slip knot anu which ties up the inertia of light into matter, 5/7.. (in HeartSun article same shape then becomes human heart and suns heart.. perfect turning inside out sorts for the shareable as doorway slingshot to next spin dimension in each case..)

Now note that if the 7 spin group is at once, the 7 spins of the tetra making "containment" (also reference Armand Wyler, icosa as 7 spin, 5 real rotations or symmetry axes, plus 2 mirror thru center or "pseudo" rotations)...

AND the 5 spin group is the 5 tetra cube in dodec.. making the perfect "projection" or distributor of spin for INSIDE the 7 "spin containment". The 7 spin tetra is in the cube which incube-ates or contains. (Wave inertia in power two or octave ratio cannot unpack non-destructively, so it is contained or incubated.)

When the 7 spin tetra cube is THEN wratched 5 spin into dodec, you have turned inside out perfect implosion, and tied the slip knot we call matter. Theosophy's greater maze, nesting tetra cube inside, and stellated in-PHI-knit dodec icos outside, is then a picture of the valence symmetry of completed electron shells. Notice that this most perfect of fractals shell completion into noble symmetry is all chemically named GOLD. Implosions perfect embedding sorts for only ALL shareable waves, so the heart electrically GOLDEN has proven shareable magnetic vectors (intention).

In summary, acheiving scale invariance among waves in all these descriptions, produces the projective geometry of waves which by this processing in fractal recursion, are made into most distributeable or shareable fronts.

This nest is called "Lesser Maze" in Theosophy, star mother in model,

This perfecting of the distribution of the patterns of pressures, a dynamic recursion, causes the waves to self organize a continuing CENTERING flow. This hydrodynamic continued concentering is called gravity. (as an inertial phenomena). As an electrical phenomena, we have labeled this self-organizing concentering "self-awareness". (Reference Marty Wuttke, attention deficit clinically eliminated when brain waves are arranged to this geometry of embedding. Pictorial article on this site entitled: "Is this Recursion?".)

Electrical recursion IS attention because it allows waves of charge (ECK) to stand in stable non-destructive self embedding. (ECK in STASIS or ecstacy). (Marty also eliminates addiction using the same process, which is simply false attempt ecstatics).