Since Acceleration and Gravity are identical (Einstein) - then if Winter is right that Acceleration and Compression are identical - Gravity must be occassioned among waves in general WHEN COMPRESSION IS OPTIMIZED - Which is mathematically perfected by fractal nesting based on Phi / Golden Ratio. Which means in summary, that Golden Ratio electrical nesting (capacitors arranged in the symmetry of PHI - ../grail.html , / stellated like ../predictions ) should CREATE measureable gravity from charge alone. This would prove the principle of why we find the moment of Golden Ratio harmonics in the Heart frequency signature - the moment of bliss - turns the ( imploding & compassioned ) heart into a gravity engine. Literally, this makes the self organizing centering force which enables our children to embed themselves into longer waves, like our SUN and eventually steer stars. This is why the first step to steering a tornado - or your loved one - is to FEEL into them .. This is the skill to turn inside out in such a way as to suck embed yourself into their center of (recursion) gravity. When you feel their center, better than they feel it themselves - we call that LOVE. This is why embedding feels like falling.

Note That From A Symmetry or Mathematic Perspective:
Successful BioDiversity as well as the Electrically Immortal EKG = Fractality / Successful Embedding

Applying the notion that Fractal or Harmonic Inclusiveness in Heart Rate Music (HRV) = Biological Immortality ( ../dardik ) - with it's implication that heart embedability = compassion , we get the idea that sustainability for ecosystems must follow the same rule. Collectively our option is to get fractal or die. The practical meaning of this what we learn from the heart, tells us WHY sustaining bliss inside the EKG requires sustaining a fractal rose pattern in our back yard and planet magnetics. (In other words, a bliss ninny is just that: a ninny, out of the context of perfect context.. Extended family has the same meaning for magnetic lines feng shui, as it does for why it takes a community to raise a child.) *

Imagine an oscillator needing to learn how to TUNNEL.. emerging from a phase lock into recursion harmonics - which are perfectly distributable...

Compare the physics notion of tunnelling to .. 'doczi spin' - See how phi harmonics naturally 'bring things to a HEAD'- Where waves converge in Phi Ratio, they get launched literally thru the speed of light - compression thru Planck Length - TUNNEL 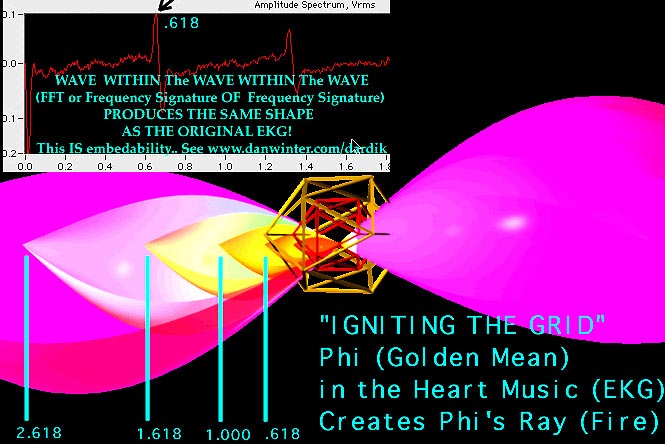 quoting from 'Fractals in Cardiology' inset below, 'The His-Purkinje network, a tree-like structure which rapidly (fractally?) transmits the electrical impulses from the atria to the ventricles.'... (end quote)

IS THIS HOW THE PERFECT BUTTERFLY EFFECT - GETS IT'S WINGS? By learning the geometry of perfect distribution - becoming infinitely shareable..

When the tree structure of this burning bush, learns to become fractal - on PHIre with compassion - does that (PHYlotactic ) connectivity become a black hole, faster than light, and in-PHI-knit?

After An Election in Effigy - Have We Found a Burning Bush?

Perfect Branch on Phire in the Heart! (Self Similar - Fibres of Perkinjole Where the Heart Catches PHIre)

Burning Bush... May Mean Something Non-Presidential AND More Than Biblical Here..

Cold Blue Maxin Light of A Phire That Does Not Consume.. Vril... Is That Your Heart Burning?

Is the Fractal Branching Tree Structure of the Notably Self Similar Fibres of Perkinjole Where the Heart Catches PHIre...

Down, up, and through the funnel. An embedding diagram is generally a good representation of a black hole's warping of nearby
space-time. But such 2-dimensional illustrations can also cause conceptual problems.

ARE BLACK HOLE Worms into Perfect Compression - The Spin Path to GOD / Zero Point?- Where Many Paths and Errands Meet?

And have they figured out that DNA needing to braid into self embedding (self-similarity in fold with in fold kneading.. ) may be a superluminal mechanism of ensoulment / superconductivity and super compression - BEFORE THEY HACK OUT THE 'JUNK' -FRACTAL- DNA.. (read about gene splicers cost us our souls because they dont know what embedding does to DNA field effects at ../magneticx ). Below exerpted from: DNA Junk Noise is Fractal / DNA sequences show fractal correlations

"In every case, they found that noncoding regions followed the Zipf relation more closely than did coding regions, suggesting that junk DNA follows the structure of languages. 'We didn't expect the coding DNA to obey Zipf," Stanley notes. 'A code literal one if by land, two if by sea."You can't have any mistakes in a code. * Language, in contrast, is a statistical, structured system with built-in redundancies A few mumbled words or scattered typos usually do not render a sentence incomprehensible. In fact, the workers tested this notion of repetition by applying a second analysis, this time from information theorist Claude E Shanon who in the 1950s quantified
redundancies in languages. They found that junk DNA contains three to four times the redundancies of coding segments. Because of the statistical nature of the results, the researchers admit their findings are unlikely to help biologists identify functional aspects of junk DNA. Rather the work may indicate something about efficient information storage. "There has to be some sort of hierarchial arrangement of the information to allow one to use it in an efficient fashion and to have some adaptability and flexibility,' Goldberger observes."

end quote. comment by Dan Winter: Efficient information storage IS FRACTAL DATA COMPRESSION - so therefore children when are we going to STOP calling the non-coding regions in DNA JUNK!!!!

* note also exquisite detail on this idea of (fractal?) embedding in Language Structure implicate in the book: "Grammatical Man: Information Entropy, Language and Life" by Jeremy Campbell. - he calls this "context richness" - or "context dependancy".

below (Clearly inspired by the work of Dr. Ary Goldberger on the Self Similar Fractality of the Heart's Electrification)

(above) Ask yourself - why the waves within waves of the perfectly immortal heart beat - look like a fern tree! (very fractal)...
other reading: (Much of Which Relates to Ary Goldberger MD & His Heart Music Son)
Lancet: Non-linear dynamics for clinicians: chaos theory, fractals, and complexity - Ary L. Goldberger
How Heartbeats Become Music
Music with a ( Fractal? ) Beat From the Heart
fractality and self-similarity in Medicine
Critical dynamics in the human brain "the underlying neuronal network self-organizes to a critical state governed by well-defined statistical law"
Fractal Landscapes and Molecular Evolution: "Mapping nucleotide sequences onto a "DNA walk" produces a novel representation of DNA that can then be studied quantitatively using techniques derived from fractal landscape analysis."
Introduction-Chaos / Fractal Scaling in Health and its Breakdown with Disease
Adapted From: In all areas of medical research there is a common physiological theme: Fractality / Embedding?

Below is from: Analysis of heart rate dynamics by methods derived from nonlinear mathematics ,(sub set) 2.4.1.4. Fractal form Dynamical analysis methods of heart rate behaviour , "A Fractal system is a specific form of chaos. The geometry of chaotic attractors often suggests the existence of fractals. A fractal is a system which has the same structure on many measurement scales. Mathematician Benoit Mandelbrot introduced the word "fractal" to refer to one of the fundamental properties of a specific structure: self-scaling similarity over a wide range of scales. This self-similarity occurs over an infinite range of scales in pure mathematical fractal structures and over a limited range in natural objects or systems. The normal heart rate time series is fractal-like and seems to display the fractal property of self-similarity over different time scales without a characteristic time scale. The power spectra of heart rate time series have been shown to concur with 1/f behaviour, which is essential for fractal-like behaviour and also characteristic of chaotic behaviour. Normal heart rate time series have been shown to demonstrate a "strangelike" attractor, which is characteristic of chaotic as opposed to random or periodic signals. Based on this Ary Goldberger has concluded that "the most compelling clinical example of cardiac chaos is paradoxically found in the dynamics of the normal sinus rhythm". These chaotic, fractal and nonlinear qualities of heartbeat behaviour have inspired investigators to develop new analysing methods of heart rate behaviour (Mandelbrot 1982, Goldberger 1996, Goldberger & West 1987, Yamamoto et al. 1995)."
--
Memory and Mind as Fractality: Embodiments of Meaning for a Fractal Mind by Mikiten-Salingaros-Yu for the Nexus Network
Application of Fractals in Ecology
Chaos&Fractals Background
Fractality - Resonance vs. The Homeopathic Approach: PATHOLOGY, COMPLEX SYSTEMS, AND RESONANCE